The dawn chorus was awoken on Sunday, 8th September by 35 cars and their teams as they assembled at Goodwood just before 9am. To say there was a cavalcade of motor car exotica would be a mild understatement! It was thrilling to see such exciting cars. We thought it was apt that the first cars to arrive was a convertible Jaguar E-Type and a modern-day Mercedes-Benz SLK. And so they took their place behind the Rolls Royce Silver Ghost pace car. The tension was building. Everyone wanted to get going! 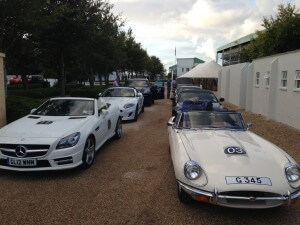 After a breakfast of coffee and  bacon rolls, the teams took in the nostalgic surroundings. , it was ‘Start your engines’ just before 9am. A short rain shower didn’t spoil the mood either.

The drivers really enjoyed the Goodwood circuit – with many cars being performance based, this was too good an opportunity!  But it was all controlled by the marshals and the Rolls Royce pace car. 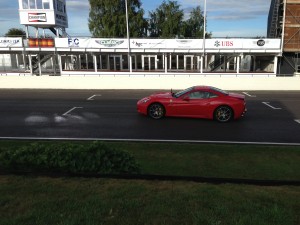 Before leaving the circuit and heading towards the driveway at Goodwood House, the teams posed for a collective shot…. 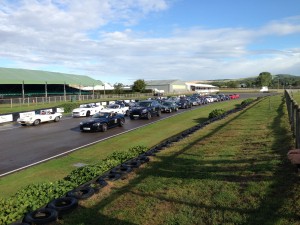 Goodwood House is scene to an amazing sight every July. It hosts a who’s-who of motor racing royalty and their cars – both modern and back in the day – and they race up Lord March’s driveway. And so the team’s did on the this chilly, yet sunny September morn. It’s something they will remember forever.

From the saunter up the driveway, the teams caught the Channel Tunnel and then accelerated through Northern France. This exotica must have been marveling at the looks they were getting, I’m sure.

The first night’s stay was in Hostellerie la Briqueterie, in Champagne, France. When changed after the dirve in their cars, the teams were escorted by luxury coach to an evening of fine champagne and culinary wonderment at Moet & Chandon.

Whilst it has been a long day, the teams and their cars enjoyed the journey immensely.  We collected these comments from a number of the teams, we hope you approve too…..
“All the buildings on the Avenue du Champagne were amazing and then we saw the Moet & Chandon venue and we said WOW’

“What a fabulous venue for dinner!”

“I am only ever drinking good champagne from now on having tasted Moet & Chandon’s finest!”

Tomorrow’s it’s onto the Black Forest and on Wednesday – Italy!

A very pleasant and well organised event. It made a trip to Windsor races even more enjoyable. Excellent evening. Gary Pettet