Only open to see during August this is a rare to chance to have a private tour of Clarence House.

Clarence House is the official residence of The Prince of Wales and The Duchess of Cornwall. Here Their Royal Highness’s receive official guests from this country and overseas on behalf of the nation.

The after hours private guided tour begins in the garden where you can see the formal area added by The Prince of Wales in 2004-2005, in memory of his grandmother.

Clarence House stands beside St James’s Palace. It was built between 1825 and 1827 to the designs of John Nash for Prince William Henry, Duke of Clarence.

During its history, Clarence House has been altered, reflecting the changes in occupancy over nearly two centuries. It was the London home of Queen Elizabeth The Queen Mother from 1953 until 2002 and was also the home of The Queen, then Princess Elizabeth, and The Duke of Edinburgh following their marriage in 1947.

The tour also includes The Cornwall Room (not included in tours that members of the public join) which is hung with 22 of The Prince of Wales’s watercolours painted between 1998 and 2006. The tour lasts 1.5 hours and concludes with a glass of champagne and a view of the garden.  Following the tour, guests will experience 5* dining nearby at Mosimann’s Private Dining Club in Belgravia. 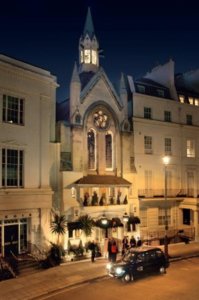 Tucked away in the heart of Belgravia, Mosimann’s Private Dining Club is offers fine dining in an elegant setting.

Anton Mosimann bought the building, an old church, and set about turning it into a discreet venue. There are numerous private rooms within the club to host dinners and we will enjoy the privacy of one of these.

The Club offers the best of dining experiences from both the service and the food’s point of view and will make the perfect end to your day.

We will serve you Champagne and canapes on arrival, before you enjoy a delicious 3 course dinner with accompanying wines.

A unique experience - not to be missed. Visit to the Castle was excellent with such an experienced Guide. Will be considering other events as soon as possible. We have already experienced the Crown Jewels adventure! With best wishes Pat