The Royal Yacht Britannia was Her Majesty’s floating palace and one her favourite places to entertain guests. 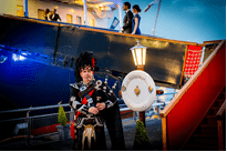 The Royal Yacht Britannia helped to make the Queen the most traveled monarch the world has ever known.Not only has she and her family traveled the world on Britannia, but the world, its statesmen and leaders has visited them on board. The guest list therefore reads like a who’s who of world leaders, including Nelson Mandela, nine British Prime Ministers, including Sir Winston Churchill, seven American Presidents, two Popes and stars of the stage and screen such as Noel Coward, Frank Sinatra and Bob Hope, who were entertained just as they would be had it been a royal palace on British soil.

With exclusive use of The Royal Yacht, guests will find the same high standards today as when Britannia was in Royal service. The evening starts with a red carpet welcome as you are piped on board.

Drinks are served in the Queen’s drawing room before enjoying a tour of the yacht. Dinner will be taken in the State Dining Room with everything laid as if Her Majesty was still on board.

This bespoke event is suitable for groups of 15  guests and above. To take advantage of this exclusive event, call now on 01442 768110 to check availability for the next tour date.

Fun fact: All the clocks on the Royal Yacht are set to 3.01. When you are there why not ask why?

Just to say I have been to many events in my years but I have never witnessed anything quite like that. Unbelievable seats and hospitality.
Edward Dunstan